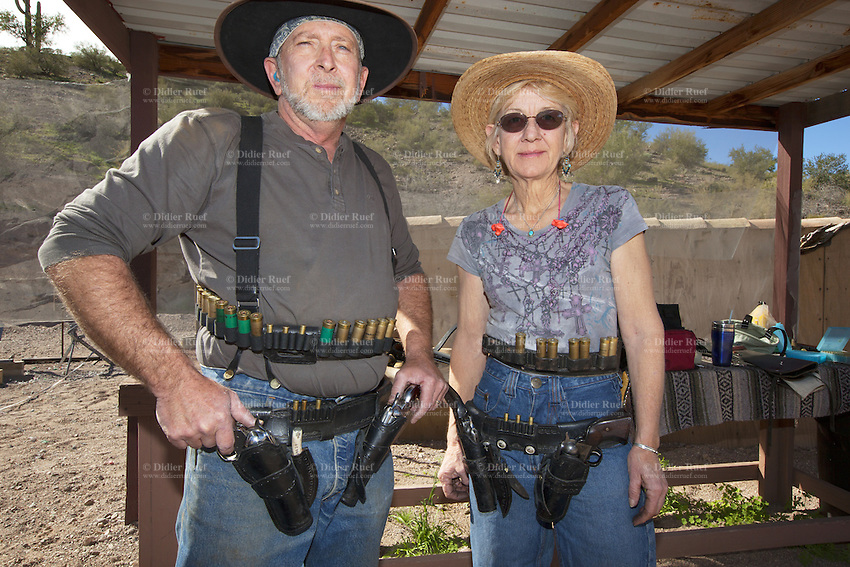 USA. Arizona state. Peoria. Peoria is distant 50 km from Phoenix. Cowtown Cowboy Shooters Association. Fake town scenery from the old Far West time. Jeff and Gail are a couple, dressed with cowboys outfits, which trains outdoors for the incoming Winter Range - SASS National Championship of Cowboy Action Shooting ( february 22nd-28th, 2016). Gail is the manager of the
Cowtown Shooting Range. The Single Action Shooting Society (SASS) is a Cowboy Action Shooting (CAS, also known as Western Action Shooting, Single Action Shooting, or Cowboy 3-Gun). CAS is a type of multi-gun match utilizing a combination of pistol(s), rifle ( Winchester), and/or shotgun in a variety of "old west themed" courses of fire for time and accuracy. Participants must dress in appropriate theme or era "costume" as well as use gear and accessories as mandated by the respective sanctioning group rules. A CAS shooter engages a target with his lever-action rifle. Cowtown Shooting Range is a semi-private outdoor shooting range and firearms training facility. A firearm is a portable gun, being a barreled weapon that launches one or more projectiles often driven by the action of an explosive force. Most modern firearms have rifled barrels to impart spin to the projectile for improved flight stability. The word firearms usually is used in a sense restricted to small arms (weapons that can be carried by a single person). The right to keep and bear arms is a fundamental right protected in the United States by the Second Amendment of the Bill of Rights in the Constitution of the United States of America and in the state constitutions of Arizona and 43 other states. 31.01.16 © 2016 Didier Ruef
© Didier Ruef 5616x3744 / 15.0MB