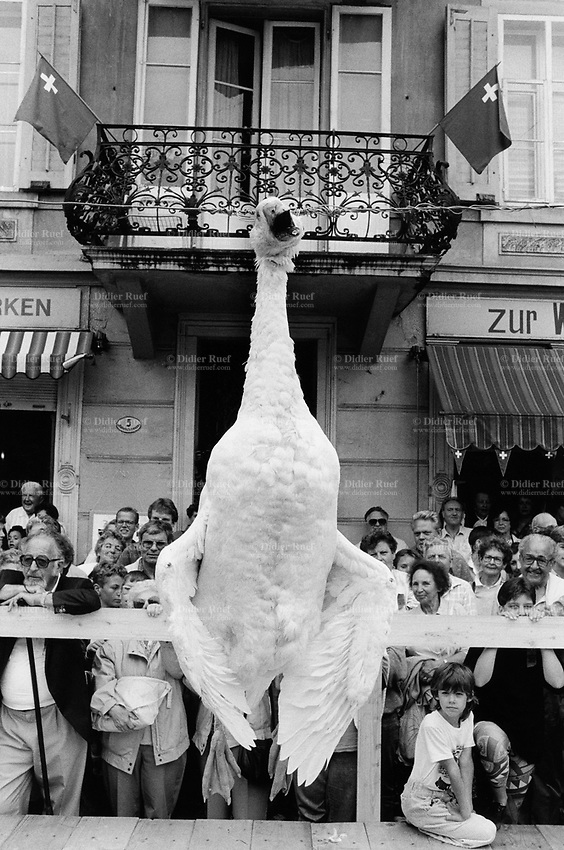 Switzerland. Canton Schwyz. Brunnen. A crowd of people attends the national costume festival which is a real traditional Swiss celebration. They all watch an old traditional custom, called Gansabhauet. The Gansabhauet is a nationally known custom event, which takes place each year on Martin's Day, 11 November, in Sursee. Especially young men, but also some women try to cut the neck of a dead goose hanging from the back of its head with a blunt dragoon sabre. The dead animal is tied on a rope. They are deprived of their sight because they wear a pointed cap over their face, a golden sun mask and a red coat. Before they ever perform their single blow, they feel the position of the feathered cattle with seemingly naïve movements in order to find the optimal point of impact. Until the total of two geese are headed, usually between five and twenty strokes take place. The setting for the action in an open stage. The origins of the custom are unclear, but probably lie in the late Middle Ages. Around 1820 it disappeared from the local custom life, before it was revived in 1863.
Two Schwyz flags are hanged on a balcony. © 1991 Didier Ruef
© Didier Ruef 2824x4252 / 4.8MB