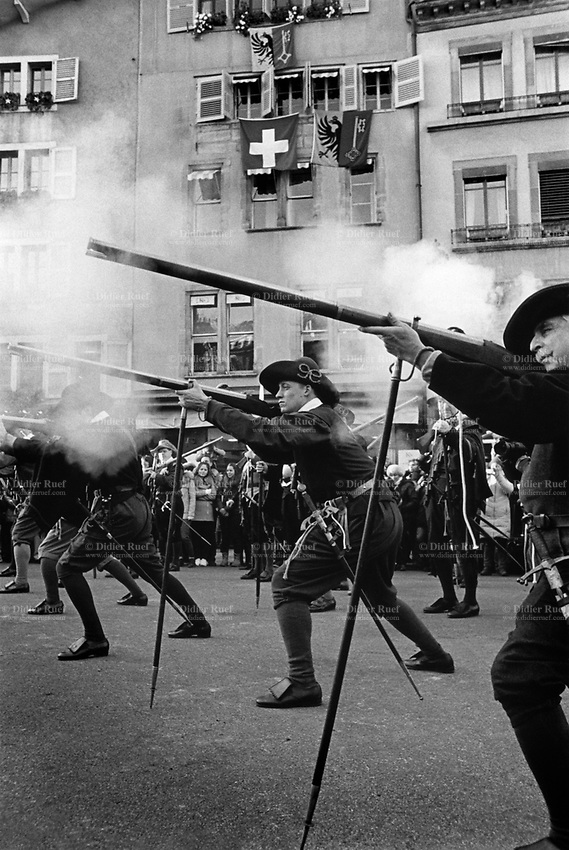 Switzerland. Canton Geneva. Geneva. Old town. A group of men, all dressed with historic traditional soldiers outfits, are firing their arquebuses during the historical reenactment of "L'Escalade". The arquebus (sometimes spelled harquebus, harkbus or hackbut; meaning "hook gun", or "hook tube") is an early muzzle-loaded firearm used in the 15th to 17th centuries. An arquebus was originally a gonne with hook, and later a matchlock firearm. The matchlock was the first mechanism, or "lock," invented to facilitate the firing of a hand-held firearm. This design removed the need to lower by hand a lit match into the weapon's flash pan and made it possible to have both hands free to keep a firm grip on the weapon at the moment of firing, and, more importantly, to keep both eyes on the target. L'Escalade, or Fête de l'Escalade (from escalade, the act of scaling defensive walls), is an annual festival held in December in Geneva, Switzerland, celebrating the defeat of the surprise attack by troops sent by Charles Emmanuel I, Duke of Savoy during the night of 11–12 December 1602. The celebrations and other commemorative activities are usually held on 12 December or the closest weekend.
11.12.2016 © 2016 Didier Ruef
© Didier Ruef 3552x5312 / 9.2MB