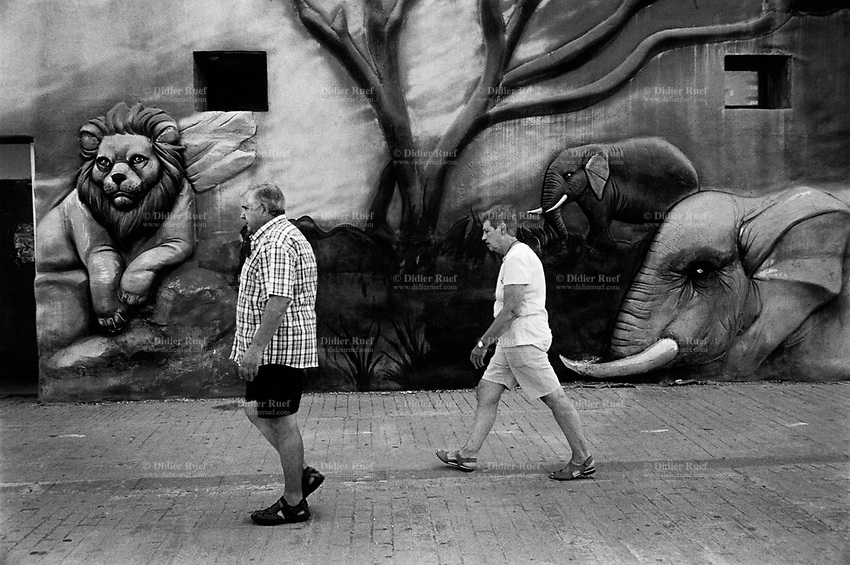 Spain. Valencian Community. Oropesa del Mar. The project of Marina d’Or (Ciudad de Vacaciones)) began in the mid-1990s. At first it looked like a traditional tourist urbanization, but in less than 15 years it became a major tourist project. An elderly couple walks on a sidewalk and passes by a painted wall with a lion and two elephants.
The lion is a species in the family Felidae; it is a muscular, deep-chested cat with a short, rounded head, a reduced neck and round ears, and a hairy tuft. The elephants are the large mammals forming the family Elephantidae in the order Proboscidea. Three species are currently recognised: the African bush elephant (Loxodonta africana), the African forest elephant (L. cyclotis), and the Asian elephant (Elephas maximus).
Oropesa del Mar (Valencian: Orpesa) is a municipality in the comarca of Plana Alta in the Valencian Community. An autonomous community is a first-level political and administrative division, created in accordance with the Spanish constitution of 1978, with the aim of guaranteeing limited autonomy of the nationalities and regions that make up Spain. 13.09.2018 © 2018 Didier Ruef
© Didier Ruef 5328x3544 / 9.9MB